The Future of MASS is Drawing Closer

An automated vessel is one where advanced decision support systems onboard the vessel, like the Global Positioning System (GPS) and auto pilot, undertake operational decisions independent of direct human control. A Maritime Autonomous Surface Ship (MASS) involves both automated systems and remote control operations. In August 2016, The Wall Street Journal published an article titled “Ship Operations Explore Autonomous Sailing.” The article suggested that by 2030 there would be remotely controlled ships and that by 2035 there would be MASS on the high seas.

In 1974, the Safety of Lives at Sea Convention (SOLAS, Chapter II-1) addressed regulating automated unattended machines on ships and regulations adapted to technology. The SOLAS Convention is an international and flexible instrument that recognizes “exemptions” and “equivalents” for safe maritime operations more than the existing Convention on International Regulations for Preventing Collisions at Sea of 1972 (COLREGS). Autonomous ships, like MASS, now offer a greater regulatory challenge.

Since that August 2016 article, there has been a race between technology and the regulation of MASS to ensure safety on the high seas in accordance with the traditional Rules of the Road or COLREGS. In 2017, the International Maritime Organization (IMO), in cooperation with international bodies including the U.S. Department of Transportation, began a “scoping” exercise including to determine how the operation of autonomous vessels could interface with international treaties and agreements to provide uniformity and promote safety at sea. In May 2021, the IMO Maritime Safety Committee (MSC) completed its initial scoping exercise, which is a major step forward.

What is scoping?
In its simplest form, scoping is a review of existing laws and treaties to set a baseline for considering how navigation of autonomous vessels will impact them. Every time there has been an advance in technology, whether it’s been a transition from sails to motors or from celestial navigation to GPS, its effects have been considered and accounted for.

From 2018 to 2020, the U.K. formed the Maritime Autonomy Regulation Lab (MARLab) to serve as a governmental point of contact to test MASS and also as a regulatory liaison. While supporting IMO efforts, the U.K. sought to facilitate the implementation of MASS trials as well as to support regulatory initiatives to improve autonomy.

In 2019, the U.S. Coast Guard sent out a request for information to seek input regarding the introduction and development of MASS subject to U.S. jurisdiction. The gathering of data was completed in October 2020. The U.S. Coast Guard has participated in the IMO scoping exercises.

While the U.K., the U.S. and other nations were testing MASS and considering regulations, IMO’s MSC agreed in 2017 to determine how safe, secure, and environmentally sound operators could be incorporated into existing international regulations and treaties. This scoping exercise or review included consideration of the human element, safety, security, liability for damage, ports, pilotage, and emergency response. In June 2019, guidelines were established to first identify existing maritime safety and security regulations affecting MASS, and second, to identify conflicts and gaps in regulations with respect to MASS.

May 2021
During the MSC meeting in May 2021, this MASS working group discussed their results which will eventually lead to policy implementation. Initially, as with any new technology, there will be new definitions and even broader definitions. For instance, who is the vessel’s master and who is the responsible person? Further, what current regulations apply or need to be clarified to address safety of life at sea? The MSC goals remain unchanged. The challenge was to make the proverbial “square peg” fit into a “round hole.” Agreement on the goal now enables the MSC and the IMO central body to work toward a MASS code to account for automated and autonomous vessels and the meeting of standards that have already passed the test of time. The functional and operational requirements of MASS must meet and conform with the traditional safety goals that seafarers encounter to avoid collisions, allisions, and loss of life and property while navigating at sea and in close quarters. The MSC in May 2021 invited all participating parties to submit goal-oriented proposals which will ultimately lead to a convention and treaty to regulate MASS.

Presently, many sea trials have been undertaken for MASS, and many nations have automated and autonomous vessels in short service. It is now important for all nations to agree on a goal and a common set of Rules of the Road as testing and operations become more prevalent and create potential safety issues. Some may say the future of MASS is here, and regulation is close behind. 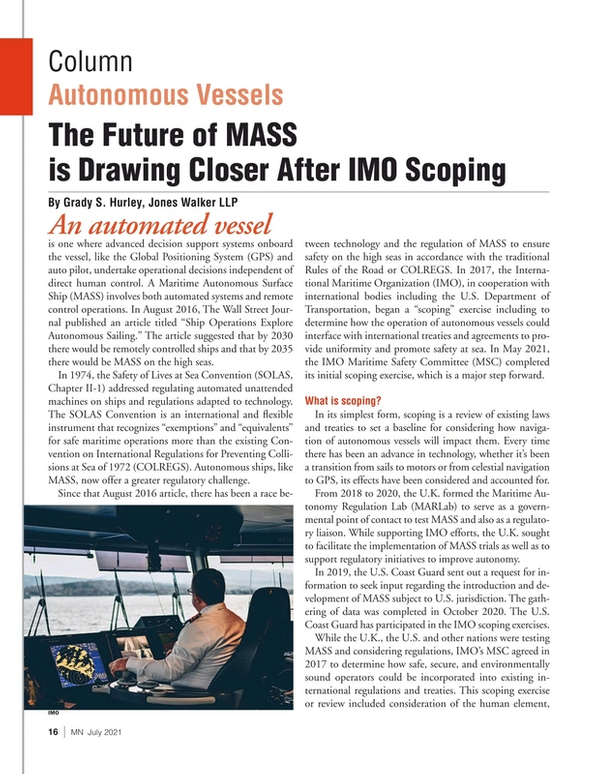 Read The Future of MASS is Drawing Closer in Pdf, Flash or Html5 edition of July 2021 Marine News

Other stories from July 2021 issue

Marine News is the premier magazine of the North American Inland, coastal and Offshore workboat markets.