It was an odd legislative journey, but ultimately one with a happy ending. That’s one way to sum up the rather tortuous process that led to the passage of the Water Resources Development Act of 2020 (WRDA). For the first time WRDA (usually reauthorized every two years) was not enacted as its own legislative bill. This time it was rolled into the massive government 2021 omnibus budget bill, the ‘‘Consolidated Appropriations Act, 2021,’’ signed into law on December 27.

Still, the WRDA text itself, with critical waterways and harbor programs and policies, survived mostly intact, i.e., as developed in previous months by House and Senate transportation committees.

Money and policy: I. Harbor Maintenance Trust Fund
Money’s important, right? Congress was generous. Critically, in addition to WRDA, the omnibus budget bill included Energy and Water Development appropriations, the legislation that provides the money for projects and programs. (Congress can authorize funding for projects. But it’s another legislative step that serves to appropriate, or fund, those authorized projects. Indeed, many projects are authorized but never receive money via the appropriations process.)

For FY 21, the Army Corps of Engineers is funded at $7.8 billion. That’s $1.83 billion more than what the President requested. The Construction account received $2.69 billion. Navigation more than $3.7 billion.

The bill requires the administration to develop a work plan, due to Congress within 60 days. That work plan will be based on ACE Chief of Engineers’ project reports since WRDA 2018. The work plan will identify ports and waterways projects selected for construction (or maintenance, for example, or navigation), including “new start” studies, meaning projects that should be added to the Corps’ list of work. ACE’s civil works historically have focused on projects that improve navigation, reduce flood risk and restore aquatic ecosystems.

“New starts” highlights another difference compared to the President’s budget, which didn’t request any new studies or new projects. In contrast, WRDA requires seven new projects and nine new studies, bringing new work into the pipeline, so to speak.

The HMTF is funded by taxes on the value of imports, certain domestic cargo and cruise passengers. As the name implies, it was created to pay for operations and maintenance costs of federal navigation channels; the fund pays 100% of those costs.

Because U.S. imports have increased at a rate faster than HMTF expenditures, the fund has built up an unspent balance of around $9.3 billion. Why wasn’t this money spent, you might ask? Recall that Congress, to keep overall federal spending under control, sets limits, so-called spending caps, on discretionary federal programs. These limits served to check HMTF disbursements all while the fund’s balance kept increasing.

WRDA 2020 removes the HMTF spending caps, actually a policy move that was first made last year in the CARES Act (the COVID-19 stimulus bill). WRDA confirms and continues the CARES Act provision. Going forward, additional HMTF money will not impact the calculations that track and limit overall federal spending, i.e., offsets will not be required elsewhere in the budget because HMTF money is being spent.

There’s more. Not only did Congress unlock this pot of money, it set directives to make sure the money gets spent. Previously, annual expenditures were set as a percentage of the fund. In WRDA, Congress set dollar amounts. Going forward, expenditures need to equal the sum of the deposits that went into the fund two years prior ($1.8 billion in FY2019) plus an amount starting at $500 million in FY2021 and increasing by $100 million annually to $1.5 billion for FY2030 and thereafter.

This is big news. Christopher J. Connor, president of the American Association of Port Authorities (AAPA) said in a press release that full spending will allow a “major expansion to address the significant backlog of navigation maintenance needed in harbors throughout the country. (This) is a giant plus to provide proper navigation maintenance nationwide.”

Tom Smith, executive director of the American Society of Civil Engineers (ASCE), said the trust fund changes will allow $2 billion annually to be spent on port and harbor dredging, which is, after all, the fund’s intended purpose. “Optimizing the HMTF is an important step in raising the nation’s “C+” ports grade,” Smith said in a press release, referencing ASCE’s national “infrastructure report card.” 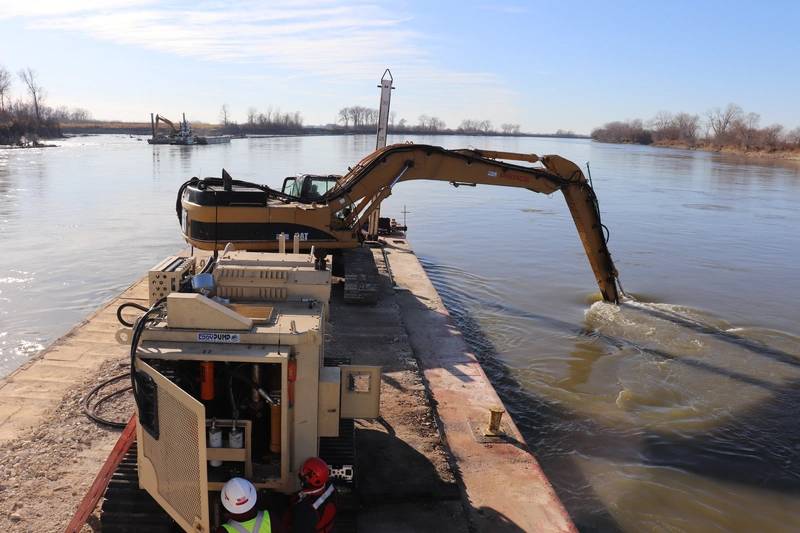 Money and policy: II. Inland Waterways Trust Fund
The big news with this fund is that Congress reduced the portion of Fund monies required to pay for waterway construction projects. This was a 50-50 split: half the money came from the fund and half from general revenue, i.e., general taxpayers. WRDA revises that split; now the fund will pay for 35% of project cost, and general revenue picks up the remaining 65%. This is for 11 years, for projects funded from FY2021 through FY2031. Recall that the IWTF is funded by a $0.29/gallon fuel tax paid for by the commercial vessels that use the 11,000 miles that make up the inland waterways system.

WRDA is also important for not including two proposals in the President’s funding request. First, a proposal to discontinue funding for ongoing waterway construction projects that didn’t have a benefit-cost ratio above 2.5 (benefits are at least 2.5 times project costs). That didn’t happen. Congress rejected that metric and directed that one new trust fund cost-shared project should be started with FY2021 money (i.e., a “new start.”) Second, the administration proposed an annual user fee on commercial vessels. Again, Congress said no.

Maritime business officials applauded these WRDA funding revisions. The cost-share change was a top priority for the Waterways Council, Inc. (WCI), the national trade group focused on the inland waterways. In a press release WCI president Tracy Zea commented that “in a difficult COVID-19 environment, the passage of WRDA is a significant achievement for efficient modernization of the inland waterways system, potentially providing more than $1 billion in additional construction funds over 10 years that should help significantly reduce the backlog of authorized projects.” Zea also noted “the rejection of any additional and onerous taxes or fees on commercial operators to supplement existing revenue streams.” 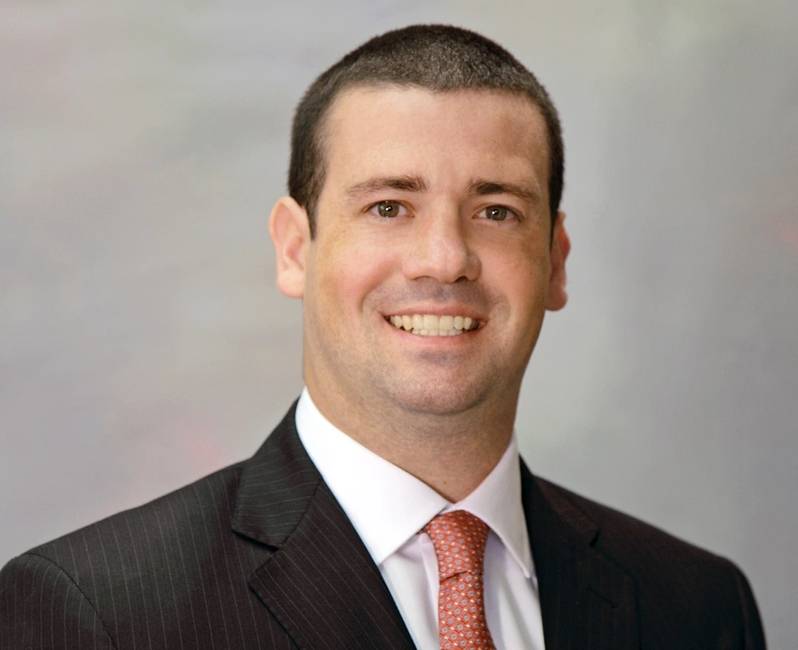 ". . . the passage of WRDA is a significant achievement for efficient modernization of the inland waterways system, potentially providing more than $1 billion in additional construction funds over 10 years that should help significantly reduce the backlog of authorized projects." - Tracy Zea, president, WCI

Dredging
WRDA sets new policy and funding directives to advance dredging projects. Policy changes allow greater use of HMTF money for dredging, for example, in an expanded number of harbors. The Corps can now accept money from states or other non-federal interests for dredging or related technical assistance. The Corps is directed to prioritize reissuing expiring regional general permits for maintenance dredging.

WRDA 2020 renews Congress’ commitment to beneficial use. WRDA establishes a “National Policy on the Beneficial Use of Dredged Material.” These aren’t all new concepts and initiatives. Again, though, expansion is important. WRDA increases beneficial use demonstration projects from 20 to 35.

Another new WRDA demand is that each Corps District Commander is required to develop a five-year regional dredged material management plan, due in one year, and then updated annually.

The plans need to address the following:

That last bullet is important because a public comment requirement is separately listed in the bill. Congress wants “stakeholders” to have the chance to examine the five-year plans “to ensure, to the extent practicable, that beneficial use of dredged mate-rial is not foregone in a particular fiscal year or dredging cycle.”

Great Lakes Dredge & Dock Company (GLDD) has tracked WRDA’s progress and completion. GLDD senior vice president Bill Hanson noted that WRDA 2020 authorized more than 40 dredging projects, including the Houston Ship Channel. Beyond specific projects, though, Hanson cited the larger importance of keeping WRDA on a two-year legislative cycle. “It has made the legislative process for project authorizations efficient and predictable,” he said, “which is meaningful for those of us in the supply chain business.” 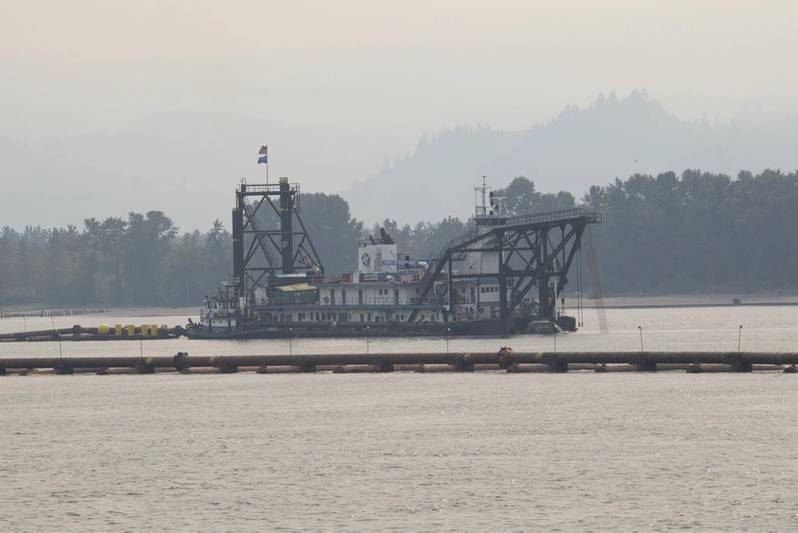 Next steps
Hanson’s reference to the importance of a predictable legislative cycle is common among industry officials. The nation’s waterways and harbors deserve regular federal attention. WCI’s Zea called WRDA 2020 “a win for the nation, our economy and shippers and exporters.” WCI, again like other groups, was clear in its message to House and Senate committee leadership: thanks for getting this done.

James E. Walker is director of government relations at AAPA. Like his peers, Walker very much appreciates that WRDA crossed the legislative finish line and the teamwork—from all sides—to make that happen. He advises, though, that maritime groups shouldn’t take too much of a break from their advocacy. After all, the federal budget process, for FY 2022, starts in March. He noted, for example, that in April House and Senate committees could be marking up their bills.

“We have to keep in mind,” Walker said, “that WRDA 2020 calls for $600 million in waterways spending in FY 2022.” That raises the big question: Is all of that money clearly included in the Corps of Engineers’ federal agencies’ budgets?

You can be sure people will be watching closely. 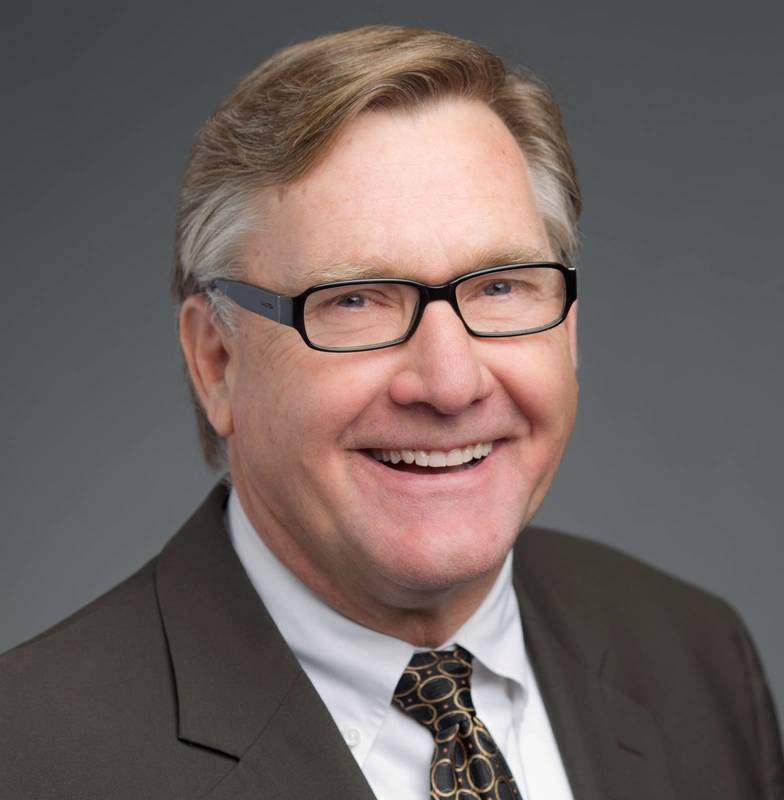 “[Keeping WRDA on a two-year legislative cycle] has made the legislative process for project authorizations efficient and predictable, which is meaningful for those of us in the supply chain business,” said Great Lakes Dredge & Dock senior vice president Bill Hanson. (Photo: GLDD) 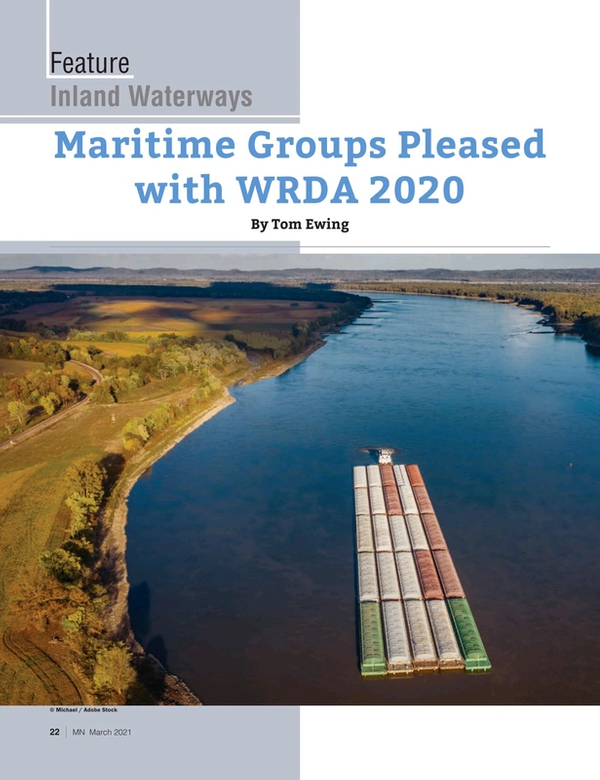 Other stories from March 2021 issue

Marine News is the premier magazine of the North American Inland, coastal and Offshore workboat markets.